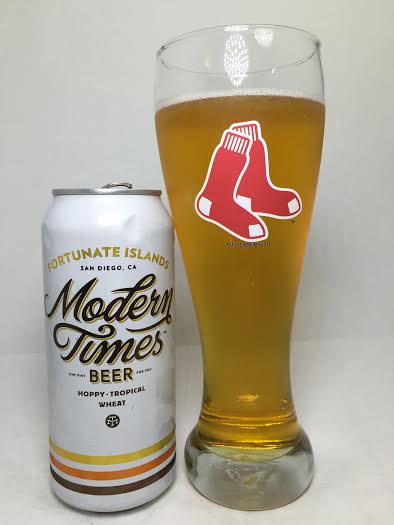 The American Pale Wheat Ale is kind of the Americanized cousin of the Hefeweizen. Obvious differences are the lack of true German characteristics and instead it is usually hopped to high hell and brewed with (as the name says) wheat. This version from Modern Times uses Citra and Amarillo hops and at 5.00%, it is also claiming to be a great session beer.

Appearance is a completely transparent light orange with no haze whatsoever. Pouring aggressively produces less than a finger of brilliant white head.

Aroma is pale wheat, lemon, and an underlying caramel sweetness. Nothing jumps out at you, but it smells nice.

Not a lot of the promised tropical fruits on the taste as I get all wheat ale on this one. It's reminiscent of a lot of commercial macro lagers, but doesn't have the skunk. In the middle of the tongue some of that lemon from the aroma tries making a comeback as does the slightest bit of a candied orange, but for me, wheat is dominating the hell out of this thing. The finish does actually have a nice kick of hop bitterness with a nice lingering flavor.

Mouthfeel is light and crisp as this would go great with a hot summer's day. Nothing unpleasant about the wheat malts and as a 5.0% light wheat ale, this is dead-on for body with no resistance going down.

Fortunate Islands may not have had all of the tropical juices I expected, but this is still an enjoyable pale wheat ale with enough hop flavors and lemon zest to make you want to grab another four-pack again and again.