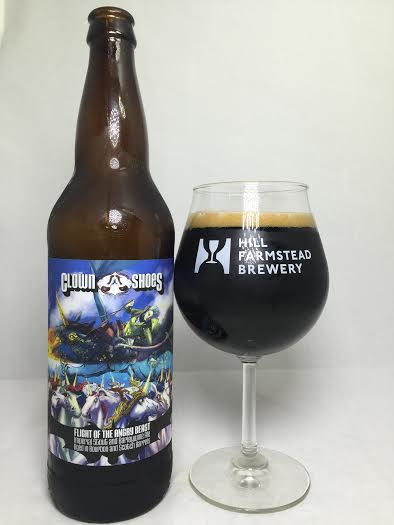 Time for another massive Clown Shoes Beer! The "Beast Series" (if you want to call it that) is a line of imperial stouts (or strong ales if you prefer) that are brewed, barrel-aged, and blended. Today's beast (pun intended) is a blend of three different beers...
The final product is blended together to create Flight of the Angry Beast.

Pours black like motor oil with ruby red on the edges. It produced less than a finger of tan head.

Wow, that aroma has a lot going on. Big milk chocolate and oak with bourbon. A nice helping of roasted malts, with toffee, caramel, dark fruits, and a big sweet kick from the scotch.

The first initial flavors that come through are from the Barleywine with its sweet malts and dark fruits with cherry and a splash of vanilla and caramel. I'd say this has more in common with a big Russian Imperial Stout since it has not only big roasted notes and some coffee, but like the Barleywine, it has a noticeable cherry presence. Again, really nice coffee and it has great char and oak from the barrels. As it warms, the chocolate is getting bigger and bolder with some dark chocolate bitterness , but also fluffy milk chocolate.

Mouthfeel is perfect for a double-digit abv barrel-aged beer. It's very thick and luscious and coats my tongue at every turn. I have memories of Clown Shoes barrel-aged beers being extremely "hot" out of the gate, but in recent years they have stepped their game with these massive offerings and this beer is no exception as I get absolutely no alcohol smell or taste with not even a warming felling in my chest or throat with each sip.

Flight of the Angry Beast actually reminds me of the Firestone Anniversary ales with the blending of several beers and the use of multiple spirit barrels.If you had to imagine what a great BA stout and a great BA Barleywine would taste like when combined, then this is pretty much what you would get. Each style represented does not dominate, but instead, they work as a cohesive unit to accent one another. Definitely a big beer to be sipped on for hours, but the complexity and drinkability are through the roof, but just promise to take it slow and savor everything it has to offer.