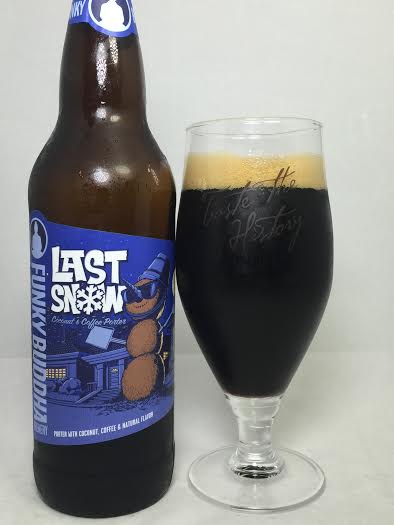 Hey, in Florida, even the Summer months feel like the Winter. Porters may be a cold-weather brew, but Florida doesn't have the luxury of watching the mercury drop to single digits, so you gotta make the most of the situation. Last Snow is Funky Buddha's homage to the fleeting winter temperatures and it has all the makings of a delectable dessert beer as it is made with coconut and coffee.

Pours pitch black for the most part. I had to hold it up to the light just right to get shades of ruby red and dark brown. I got two fingers of a beige/light brown head.

As soon as I popped the cap I got wave after wave of roasted coffee. When I stuck my nose in, I was floored by massive amounts of coconut and plenty of chocolate. It's basically a Mounds bar.

With all of that coconut and chocolate on the aroma, I have to say that the robust, base porter is what sticks out for me. Intensely rich, dark coffee and roasted malts come to me first. Only after that does the toasted coconut make itself known. Again comparing this to a Mounds or Almond Joy, the coconut has a sugary tinge to it like candy. While there was some delicious dark coffee up front, the finish is more comparable to bitter coffee grounds which linger on the back of my tongue.

Mouthfeel is dead-on for the style and abv. It's not thick enough to be a stout, and it's not thinning or watery. No alcohol detected and it is quite robust and full for a standard porter.

Last Snow was an intense combination of in-your-face coconut and coffee. The flavors popped more on the aroma than on the taste, but this was still a delicious flavored porter reminiscent of a Mounds or Almond Joy. It is very similar to the Wormtown Norm in that regard, but either beer will give you the same result.