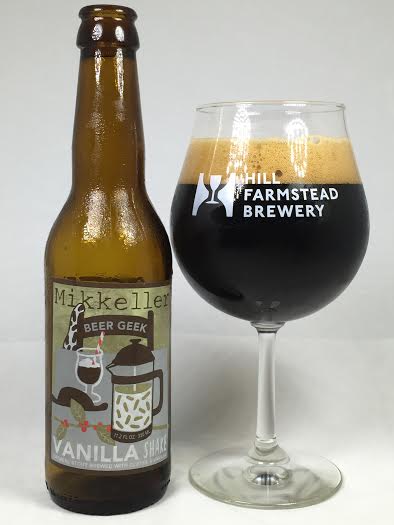 Mikkeller's Beer Geek series is well-known throughout the beer world. They are luscious stouts flavored with everything from coffee to chocolate to today's variant: Vanilla!

Massive, MASSIVE amounts of vanilla on the aroma with roasted malts and burnt marshmallow. Maybe a little coffee too.

The vanilla is the dominant force in this beer with an overpowering presence from start to finish. The flavors of the base stout are also easily picked up with roasted malts and hints of dark chocolate sprinkled throughout. I also detect some lactose which is making a sweet beer even sweeter, but surprisingly this isn't cloying. It's most definitely on the sweeter side, so those whole like the sugary, dessert beers will eat this up.

Mouthfeel is thick, full-bodied, and coats your entire mouth leaving some sugary sweetness sticking to your lips. The oatmeal has made this incredibly soft and creamy. I am amazed this is 13.00% and there is no alcohol taste, heat, or even warming in my chest. You can easily kill your entire bottle without realizing it.

Vanilla Shake targets the beer enthusiast with a sweet tooth, and in that regard, it works beautifully. It is similar to the Southern Tier Creme Brulee, but this is much more balanced and the sugary vanilla isn't off-putting. Don't let the abv fool you as this drinks much smaller than it's alcohol content suggests. So enjoy as an after dinner beer, but you've been warned about its dangerous drinkability.