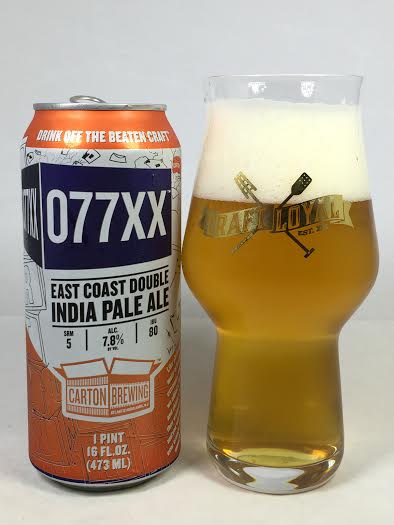 An East Coast Double IPA influenced by the West Coast, "0'Dub" originated as an experiment on Carton's session ale "Boat Beer". By adding different yeasts and more hops, they dialed in the recipe for their year-round Double IPA.

Pours light orange/dark yellow, hazy for the most part. I got three fingers-worth of a white, frothy head.

Dank, wet hops on the aroma with a hint of pineapple and a large resin and malt presence.

Definitely more West than East coast. That familiar, dank garlic/onion is first and foremost, but it doesn't take away from other flavors. Earthy, bitter hops combined with hop resin and a touch of pine help create a diverse palette of flavors. If I dig deep I can pick out maybe grapefruit or grapefruit peel, but this beer is all about hop oils and bitterness rather than juice.

For a Double IPA with an emphasis on oils and resin, the body is surprisingly light for the style, but not thin or watered down. No alcohol presence to speak of. It does finish dry with some lingering resinous taste, but it's not an obstacle you won't be able to overcome.

Those who enjoy their IPA's with a focus on resin and earthy hops will flock to 0077XX. A casual drinker looking for an easy-to-crush IPA will need to go elsewhere. 0'Dub delivers a highly-hopped Imperial with drinkability even with it's reliance on mossy dankness and hop oils. It's a tribute to the West Coast style of IPA's done well, but a bigger contribution of East Coast tropical juice and pine would have been welcome too.