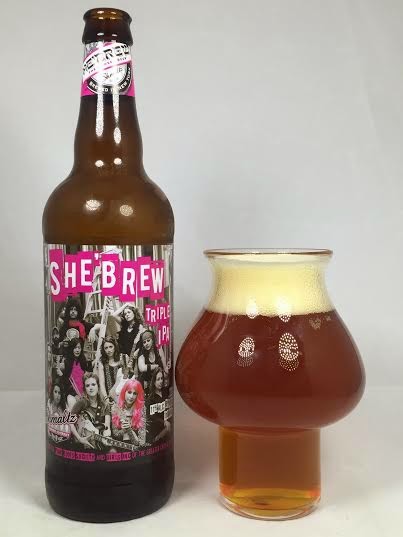 In honor of International Women's Collaboration Brew Day (March 8th, 2015), Shmaltz rounded up the women and female friends of Shamltz Brewing and they collaborated on a massive Triple IPA coming in at a staggering 11.00%. A portion of each sale of She'Brew goes to the Pink Boots Society scholarship fund, a global non-profit that aims to advance women in the beer industry.

The aroma predictably was big in hop resin with tons of bitterness. It also had some orange and strawberry and maybe even a hint of cherry with a touch of alcohol.

Without question this is a malt and resin bomb. The good thing is that those are not the only things here on the taste. There are components of wet, mossy hops with a noticeable orange and mango flavor which greatly assists in balancing out the bitterness. The resin is quite overpowering at times, but a tasty hop flavor is what keeps this baby in check.

Yeah, from front-to-back, the hops and resin just conquer your palate. As a "Triple IPA", that is obviously expected of the subgenre of the Imperial IPA, but surprisingly I am having no trouble putting this thing away. At times I am reaching for a sip of water as this finished with considerable dryness, but I definitely can have this whole bomber to myself. As for the 11.00%, I do get a small warming sensation in my chest for each sip, but other than that, the alcohol is well-hidden.

She'Brew Tiple IPA lives up to many others of the style, but this one has a lot of drinkability despite it's strong bitter character and dry feel. As with most other Triple IPA's, this is resinous and dank, but thanks to some citrus and a smooth and un-syrupy feel, this goes down easy and brings enough complexity to leave you wanting more. Pretty impressive for such a massive IPA.