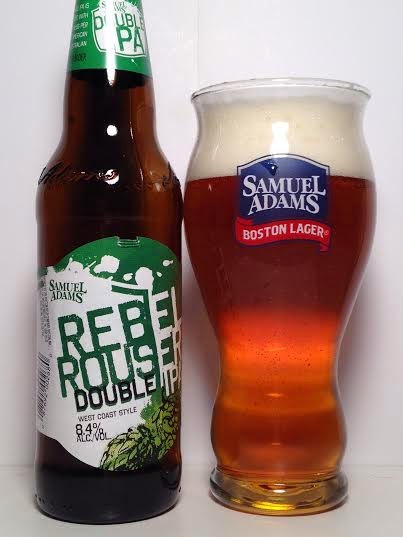 Samuel Adams has been accused of resting on its laurels for quite some time. Many of us who used Sam Adams as our "transition" into craft beer have become spectacular haters. Hating Sam Adams is now the cool thing to do and they've become the Nickelback of the craft beer world (assuming people still even consider them craft beer). Co-founder Sam Koch is not shy about expressing his feelings for today's craft beer movement and most will say that Sam Adams needs to change with the times or risk being left behind.

So, a little over a year ago, Sam Adams decided to try something new and released their Rebel IPA, which is marketed as a West Coast Style IPA using mostly West Coast hops, but focusing more or aromatics rather than bitterness. Today we have Rebel Rouser: An 8.40% Imperial brewed with Bravo, Galaxy, Zeus, Simcoe, Centennial, Cascade, and Amarillo hops.Sam Adams says it's not simply a bigger Rebel IPA, but its own being.

I will give this to Sam Adams, this smells like a West Coast IPA with it's dank garlic/onion aroma. Some wet, mossy grass too, and it comes back to the East Coast with some pine and cedar.

While Rebel IPA wasn't focused on bitterness, Rebel Rouser is quite the bitter brew. It is very hop-forward with those dank hops and the aforementioned garlic/onion. The dominant flavor here is sticky, resinous pine which isn't a deterrent at all considering how robust it is. There's no juiciness to speak of as this is all about the hop bitterness and tree sap.

At 85 IBU's, this one snuck up on me, but it is surprisingly not a challenge to put down. It's full-bodied for a DIPA with no unpleasant aftertaste and the alcohol is completely hidden. Maybe a little thick and syrupy, but not dry at all.

The casual Sam Adams drinker may not find Rebel Rouser to be their cup of tea, but this offering combines plenty of characteristics of both East and West Coast IPA's. The aroma and taste of the dank hops reminds me of Sierra Nevada and Stone while the tree sap and pine bring me right back to the East. Definitely bitter hops all the way, so if that's your thing with Imperial IPA's, then Rebel Rouser can hold its own with some of the big big boys.