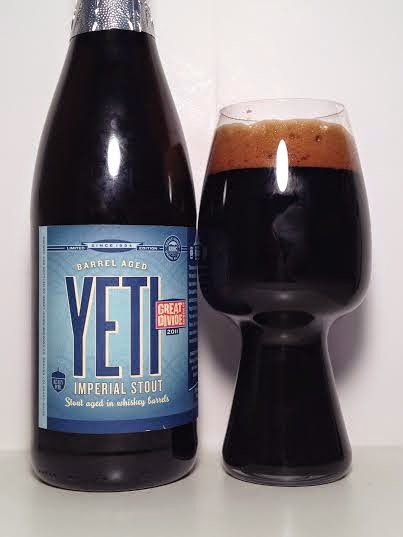 If you tuned in last time, you saw my review of Great Divide Yeti and how it is a superb example of what a standard Imperial Stout should be. What can make it better? Barrel aging it! In this case, we have the standard Yeti aged for nine months in Stranahan's Colorado Whiskey barrels.

I got the classic Shane Diesel pour with a pitch black body and managed two fingers of dark brown head.

The first thing I pick up on the aroma is a blast of roastiness. The whiskey is there, but it has mellowed out nicely over the years. A nice pop of coffee and chocolate with oak and a splash of vanilla deep in the back with some toasted coconut. I'm also getting either black licorice or some dark fruits too. It has a lot of flavors and they all work nicely.

My exact reaction on my initial sip was: "Woah, Holy Fu**in whiskey!". Yeah, while subtle on the nose, those nine months in whiskey barrels shine through loud and clear on the taste (even after almost four years). It's not a burning taste, but rather incredibly sweet, almost as sweet as rum. As it warms up, some nice oak and roasted coffee come out. Aside from the overpowering whiskey component, this beer is basically liquid black licorice. It's so powerful that I fear my potassium levels will drop at any moment and I will develop minor heart arrhythmias. All kidding aside, the licorice is balanced out by the barrel and the roastiness. Not as much chocolate or vanilla as I would have hoped, but the finish has a nice cherry kick. It actually carries an unexpected tartness that helps move the whiskey and licorice along.

Compared to the standard Yeti, this doesn't have the same viscous, motor oil-like mouth feel. Granted, it's still relatively thick and coating, but not nearly as good as the original. As I hold the beer in my mouth for a few seconds, the sensation of carbonation bubbles pleasantly dance on my tongue. It drinks like a 10.70% stout should, but it's not too difficult to put down and while there's a miniscule warming in my throat and chest, there's no actual alcohol presence.

If you want your Yeti Imperial Stout soaked head-to-toe in whiskey, then you obviously should check this beer out. That being said, BA Yeti is too overpowering with its whiskey which can be off-putting. I let the beer sit for a while, but was only able to pick out subtle chocolate, coffee, and oak. Other than that, the black licorice took over and never relinquished control for the remainder of the experience. It seems like an acquired taste, but if the licorice-whiskey bomb sound like your cup of tea, then you should go with BA Yeti. As for me, I will take the original any day of the week.