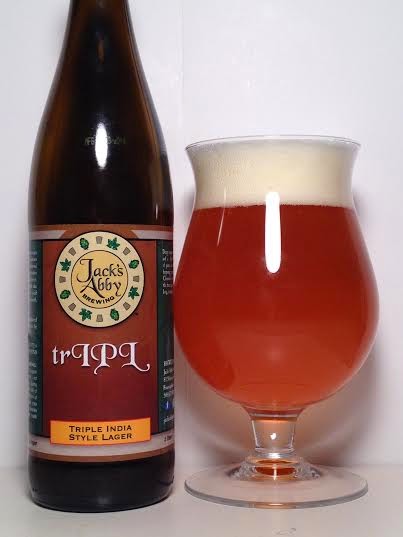 The latest release from Jack's Abby is their first ever Triple IPL. Brewed with Columbus, Chinook, and Citra, this is definitely the first Triple IPL I've ever heard of. If anyone can blow you away with one, it's Jack's Abby.

Well, with just one whiff I can say that has got to be the most hop-forward IPL I've ever experienced. It's not bitter hops, but rather hop juice with orange, pineapple, and peach. It has that distinct yeast smell to let you know it's still a lager.

Juicy on the smell, but the taste brings something new to the table. The front of the tongue is assaulted with bitter, grassy, herbal hops that have some serious bite. Behind that those juicy flavors make a comeback with a wave of tropical fruits which bring a balance to the bitterness of the hops. It actually has the taste of a lot of great Double IPA's. The finish is resinous and even a bit piny.

At 10.00%, you might be expecting a somewhat syrupy mouthfeel, but this drinks like most of Jack's Abby double IPL's. It has a medium body with some good carbonation. The overall feel and finish is refreshing as it has no lingering bitterness and feels relatively clean. Alcohol can't be found, but there can be a warming sensation in the throat on the occasional sip.

A Triple IPL that drinks like a Double IPA, trIPL showcases a diverse set of hops that bring the best of herbal and juicy notes to a bitter, resinous IPL. The 10.00% won't register on the taste, but considering it's high level of drinkability, the abv will catch up to you eventually as you casually slug this down. Probably the hoppiest lager I've ever had and of course Jack's Abby was not only behind it, but made it stellar.