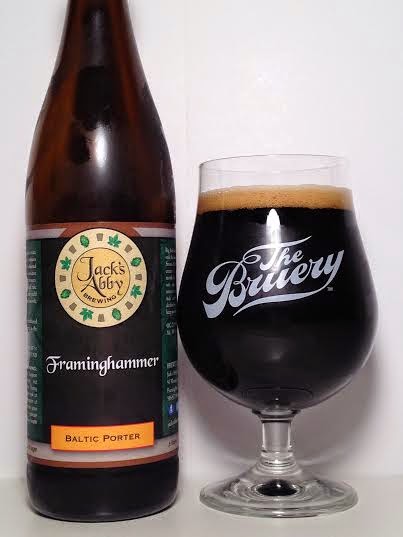 Jack's Abby has become synonymous with lagers. Today is their infamous Framinghammer which is a Baltic Porter coming in at 10.00%. A Baltic Porter is basically a stout fermented with a lager yeast. Jack's Abby has done multiple variations on their Framinghammer (obvious foreshadowing), but before we even think about those, we should pay our respects to the base beer.

Pours jet black like a stout. Some dark brown and ruby red on the edges. It gave off less than a finger of a light brown head.

A lot of roasted malts on the nose, but at the same time I am getting a dominant oatmeal smell too. Just, oats and brown sugar with a hint of coffee.

The broken record keeps spinning, but this is just roasty as all hell. There's more of a chocolate flavor on the taste and it makes for a smooth espresso experience. A big black licorice thud hits my tongue on the middle, but that oatmeal is here too and I can also pick up some of that lager yeast. It's also rather bitter too with it's unexpected, but welcome hop presence.

Man, smooth is the word of the day with this beer. Not only smooth, but velvety and pretty thick too. I wouldn't say it coats your mouth like an Imperial Stout, but it gets the job done. Practically no carbonation and no unpleasant lingering flavors. It's a heavy beer at 10.00%, but there's no alcohol taste at all.

Framinghammer is a robust Baltic Porter that is smooth from start to finish. That abv sneaks up on you due to this being such a drinkable offering, so please tread lightly. It has the crisp finish of a lager with a robust taste and mouthfeel of a stout. One of the best of it's style and just a roasted bomb to your palate.