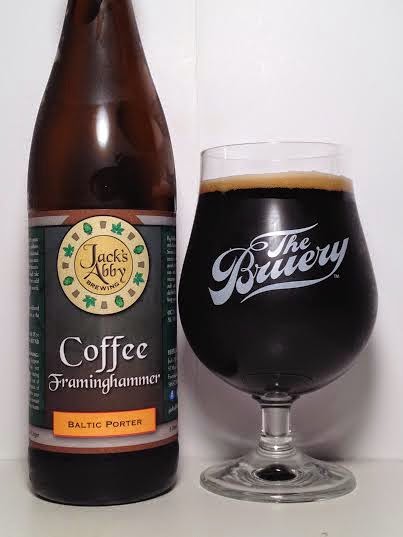 Pours jet black with brown on the edges. Got less than a finger of a brown head which disappears quickly.

Sweet bourbon and fresh-roast coffee beans on the aroma. Although, the coffee is not as aromatic as I would think. A little bit of chocolate, wood, and lager yeast too.

This beer has almost a year on it and I have to say I am having some trouble picking up any coffee on the taste. It's there, but I guess just not as much as I expected. Still, it has some rich roasted notes. Middle of the mouth is some pretty good vanilla, bourbon, and wood from the barrel. It is similar to the BA Framinghammer, but with very subtle coffee.

Like the other variants, this too is silky and smooth. Barely any carbonation to speak of with no cloying or lingering aftertaste. Like it's close-knit family, no alcohol taste at all and it goes down so easily.

Coffee Framinghammer is not a bad offering by any stretch of the imagination, but it does come up a bit short in coffee. While it is reminiscent if the BA Framinghammer, I would expect the coffee version to add a significant amount of the ingredient it promises to deliver. Don't get me wrong, there is a good amount of bourbon and oak to imbibe on, but unfortunately the coffee was not front and center as it should have been.