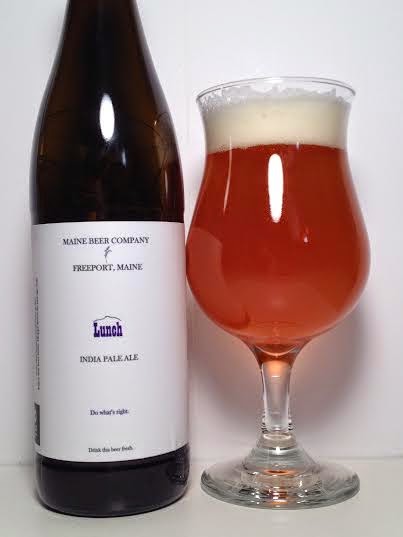 Maine Beer offerings are available year-round down in Massachusetts, but it does take some precise timing to snag a bottle of Lunch when it becomes available. When announced by your local store, you'll only have a window of a few hours to grab one bottle from the one case that came in. Granted, once you have it down, it becomes second nature, but it can still be a pain in the ass.

So, what makes Lunch so special? Well, it is one of the highest rated offerings from Maine Beer and was the first beer from them that gathered buzz and hype outside of it's normal distribution zone thus putting them on the radar in the craft beer community.

Pours a hazy, golden orange with some carbonation bubbles streaming off the bottom of the glass. Got one finger of bright white head.

The aroma is all tropical fruits with earthy hops and subtle onion.

Lots of bitter hops up front with lots of grassy/mossy/floral notes. On the back end though it has a fruity finish with peaches, grapefruit, and orange juice. The dank hops work with the garlic undertones and there is just the slightest glimmer of pine. It's pretty nice to have two ends of the spectrum in one taste. I can see why Maine Beer calls it an East Coast version of a West Coast IPA.

The finish is clean and refreshing - not dry at all. There's a slight lingering of bitterness and no alcohol presence at all.

Maine Beer Lunch combines the best elements of East and West Coast IPA's into a flavorful and drinkable beer. My only complaint is that I wish I could get it more often.