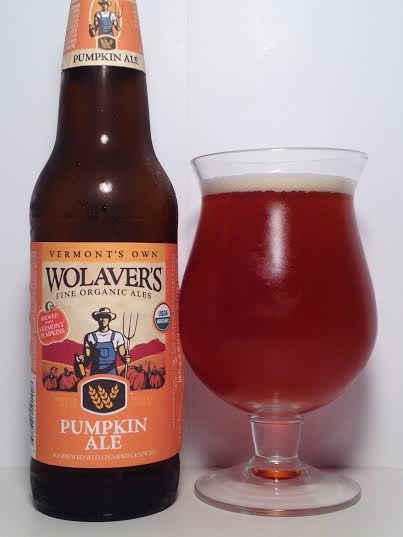 The pumpkin beer craze has exploded within the craft beer community over the past several years. While it used to be a small fad, virtually every brewery now has their own version. However, I know of very few organic variations on the style. Founded in 1997 as the first certified organic brewery in the United States, Wolaver's has produced their own pumpkin ale which recently won the gold medal at the 2014 Great American Beerfest last September in Denver.

Pours a rusty orange with a finger of white head.

A lot of cinnamon on the aroma. There's some subtle graham cracker crust and some nice genuine pumpkin too. Pretty standard aroma, but not overly sweet like a lot of other examples of the style.

The cinnamon is once again at the forefront of flavors on the taste. While pumpkin wasn't too present on the aroma, it is definitely here on the back of my tongue which makes for a nice finish. Not a lot of other spices or other pumpkin beer flavors.

I'm glad to say that the beer isn't thin and actually has a nice body to it. There isn't anything overly sweet or cloying with the flavors and it goes down nice and smooth.

A gold medal? I wouldn't go that far. Wolaver's Pumpkin Ale, at best, is a standard representation of the style. It has everything you'd expect from a pumpkin ale, and that's about it. On the plus side, it isn't watered down and the drinkability and natural flavors make it better than most of the pack.