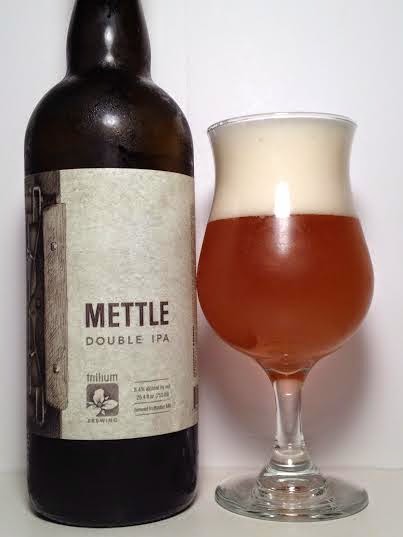 I know I keep saying "back to Trillium" or some variation on that phrase, but hey, I'll go back any time, any day. Mettle is a Double IPA dry-hopped twice and is the bigger brother of my previous review, Speed Mettle.

Pours a beautiful, hazy, golden orange. I poured rather aggressively and got three fingers of fluffy, white head which leaves tons of lacing in its wake.

My God is that just one of the juiciest DIPA's I've ever put my nose to! It's just an onslaught of oranges, grapefruit, and pineapple. Nice hoppy presence and believe it or not, a somewhat creme and sherbert smell to it too.

Much more bitter and hoppy on the taste, especially at the beginning. As it hits the middle of my tongue all of those fruity notes on the aroma make their presence known. There's more of an acidic citrus flavor to this beer and as I said on the nose, I do pick up this crazy orange sherbert taste. It's very unique, but I dig it.

This has a nice, crisp mouthfeel. It's a little dry on the finish, but the palate isn't destroyed by hops, so the drying effect doesn't last. Plus you get this awesome lingering mango taste which just rocks. This is a big DIPA at 8.40%, but it's easy to drink and frankly, it's simply delicious.

Mettle has the best of many worlds. Lots of hops, tropical fruits, and an unexpected sweet, creamy, almost dessert flavor. I can't think of another DIPA that has provided all of those characteristics. It's complex, tasty, and drinkable. There's really nothing else you could possibly want.