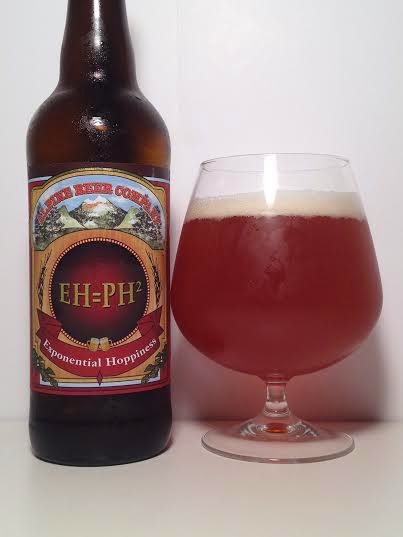 I get to use my new, giant-ass snifter for this review. Yay! It pours a dark, rusty orange bordering on amber. It has a very hazy appearance - can't see anything through it.

At 11.00%, I'm glad to say the aroma isn't all resin and syrup. A lot of orange and grapefruit at first which give way to earthy, herbal hops. The orange is almost sugary in a way and I pick up some subtle white grape aromas too which may point to some possible New Zealand hops being used. It reminds me a lot of Founders Devil Dancer, but not as resiny.

The taste reminds me of a lot of "Triple IPA's" with it's resinous, piny notes. It's quite dry and bitter up front, but not too much to be a turn-off. When it hits the back, those tropical fruit juices make themselves known. I pick up oranges and white grapes, which makes for a delicious combination.

It finishes with bitter hops lingering on the back of your tongue with a slight sticky dankness. I have to say for 11.00%, the alcohol is practically non-existent with the only evidence being a miniscule warming on the finish, but otherwise the alcohol is hidden well.

When it comes to a Triple IPA, Exponential Hoppiness gives you a ton of bitterness balanced with notes of orange and white grapes. While there is a residual resinous aftertaste, this drinks lighter than an 11.00% beer while maintaining plenty of hoppy and fruity flavors.