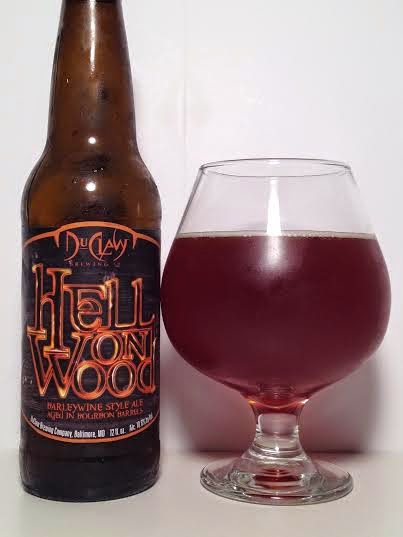 I got this as an extra in a trade several months ago and it has just been sitting in my fridge. This is my first DuClaw beer, but it sounds interesting. Hell on Wood is their award-winning "Devil's Milk" barleywine aged in Kentucky White Oak bourbon barrels.

Pours an opaque amber/copper color with maybe a half finger of white head that didn't stay around. Looks a lot like dirty iced tea.

American Barleywine for sure! Huge hop presence to kick things off. Barrel characteristics are a lot more subtle than I was expecting, but they are in the background. Notes of butterscotch and toffee sweetness are in the distance. Maybe a slight charred oak and burnt caramel. A tiny alcohol presence isn't a big deal, but man, the hops are really in your face.

The taste follows the nose perfectly. I'm hit with burnt sugar and caramel followed immediately by citrusy hops and a small kick of vanilla. Tons of butterscotch as well. I am slightly disappointed by the lack of barrel character, but I if I had to describe this beer in one word, it would be "smooth". This goes down almost too easily and for 10.60% you can't detect a hint of alcohol on the taste.

My first DuClaw beer was a home run. I can forgive the absence of standard barrel-aging characteristics because this beer has a an array of flavors and tons of drinkability for such a big beer. Easily one of, if not the best, American Barleywines I've ever had.